The course at Bull Run was designed by Rick Jacobson, a Chicago-area architect who worked for Jack Nicklaus design company before starting his own firm. Jacobson worked on such Nicklaus projects as PGA West in LaQuinta, CA; English Turn, site of the New Orleans PGA Tour stop; and Desert Mountain GC in Scottsdale, AZ. He's also the designer of Bear Trap Dunes in Delaware and Hollow Creek in Frederick, MD.

"About the course...I don't drive the ball that straight myself, so it's a course where you can spray it a little and not be punished too severely. We also started with the idea of multiple tee locations – that not only vary the distances of the holes, but also the angles you play into the landing areas."  - Rick Jacobson, Golf Course Architect for Bull Run Golf Club 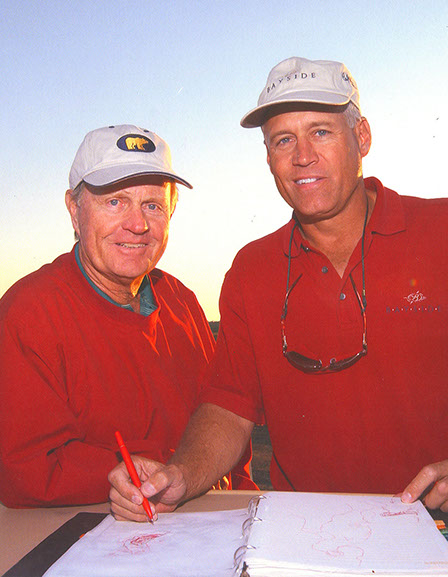 Jacobson's aim at Bull Run was to preserve the look of the land and create a player friendly course that also has loads of challenges for the more daring hitters. You will find wide fairways done in a concave/convex shape that steer the ball toward the center. There are large landing areas, sometimes defined by grass hollows, bunkers, or trees.

But there are also water hazards as well, starting from the first tee, a par-4 that measures 383 yards from the back tees and 279 from the forward tees. "This is a great starting hole," says Bull Run's General Manager Mike Tate. "There are no bunkers around the green to give you trouble, but there is a pond. From the back tees the men have to carry about 100 yards over water; the women's tee is off to the side. If that water hazard were on any other hole, it wouldn’t cause any problems. But because it's the first tee, there can be some balls in the water."

There are forced carries over wetlands on some other holes as well. One pond was in existence when the course was built and two others were added by the architect to make things more interesting. No. 2 is a straightaway par-5 (538 yards from the back tees and 406 yards from the forward). "This green is potentially reachable in two shots, particularly from some of the forward tees," says Tate.

The character of the course changes on No. 4 where the holes go from being wide open into a tree-lined fairway situation. You also get better views of the course’s namesake, Bull Run Mountain, on No. 4, a par-4 hole that is 432 yards from the back tees and 310 from the forward. From the tee, your best bet is to aim about 30 yards right of the bunkers in the distance to the widest area of the fairway. Then the course begins to weave its way through the woodlands and a number of holes require forced carries of one kind or another.

As you get back to No. 8, you are out in the open spaces again. No. 9 is a very difficult dogleg right par-4 with a pond to the right of the fairway. "Longer hitters will try to go over the water from the tee by cutting the dogleg. But if you bite off too much, you can end up in the water. The safer shot is to make your drive to the left toward a pot bunker in the fairway. Use a fairway wood for your second shot. There are bunkers and water to the right of the green, but there’s a nice bailout area on the left," he says.

"When you play Bull Run, you're going to find more than one hole that is picture perfect," says Mike Tate. "We're a course without one signature hole. There are lots of options for signature holes here." After your first round on our course, you will spend lots and lots of time going over the holes in your mind and yearning to come back and try them again.